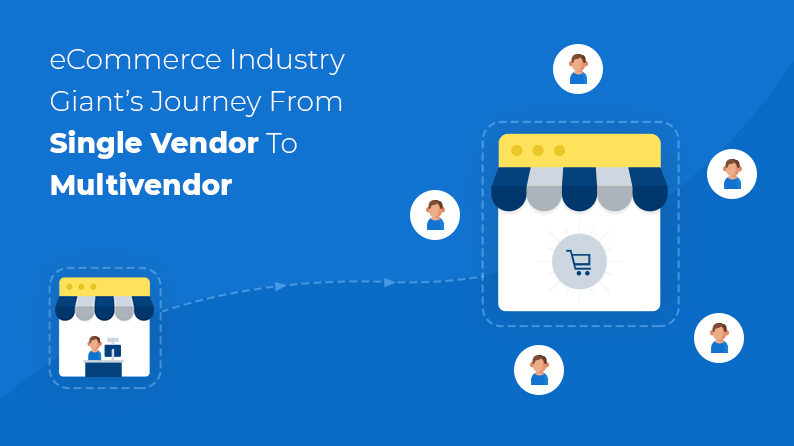 If given the right platform and technology, entrepreneurs can showcase their marketing prowess and easily establish their online presence. The main benefit that drives customers to these eCommerce marketplaces is the ease of finding every product of convenience at a single platform.

An Indian based eCommerce website, Flipkart has certainly mastered the marketing technique and created a power-packed ecosystem that bridges the gap between sellers and consumers.

Based in Bengaluru, The company was founded by Sachin Bansal and Binny Bansal. In the year 2007. Flipkart started its journey as an online marketplace in the year 2013. (Source)

From a five-and-dime store to a multi-vendor marketplace that employs over 2.1 million people. Walmart has certainly changed the marketing game of discount & coupon retail. Presently, around 200 million consumers visit Walmart regularly.

The scenario, however, was very different approximately 50 years back. Sam Walton was just an entrepreneur who had the dream of establishing a grand discount chain. Walton had the vision that “selling for less, will sell more”. Sam Walton opened the very first retail store under the name Ben Franklin. After three years, under the same franchise, Sam Walton established Walton’s five to dime stores.

On the strong belief that selling products at the cheapest price possible will reap profits, Walmart was born. Soon after, the company became public and started expanding its operations in different countries and became a household name. That’s how Walmart became a multi-vendor from a single vendor.

An online grocery delivery service that started in October 2011 in Bengaluru, Big Basket quickly grew as a leader in the grocery delivery space. The firm made changes to its operations by entering the private-label market, offering subscription-based deliveries, and supporting the marketplace model.

Currently, Big Basket has over 10 million registered customers and operates in more than 25 Indian cities. With a valuation of over $1.2 billion, it is India’s largest online supermarket backed by retail giants like Alibaba. Big Basket offers a 90-minute delivery option apart from the standard-delivery slot in Tier-1 cities. Amid rising competition from Amazon, Flipkart, and other retail giants, Big Basket revamped its warehousing operations to deliver goods in less than four hours.

Cashing in on the booming online grocery market, Big Basket is targeting a revenue of around $832 million in FY20 up from $422 million in FY19.

Established in the year 2007, Myntra operated as a B2B platform that rendered on-demand personalized gifting services to the customers. Switching from personalization to online fashion, within three years the company started gaining recognition and became a market leader.

The concept of eCommerce was very new to the Indian market back then. That’s when Myntra nabbed the opportunity and launched its retail online marketplace. By the year 2012, the company was selling products of over 350 domestic and international vendors.

In the year 2014, Myntra was acquired by Flipkart, another leading eCommerce marketplace. Under the ownership of Flipkart, Myntra continues to operate as a standalone subsidiary by creating a niche marketplace and targeting the “fashion-centric” population. Soon after, Myntra was selling around 1,50,000 products from more than 1000 brands.

How the practical concept of sleeping on air mattresses could reap profits in billions! Sounds unimaginable right? How two youngsters who were unable to look for rented accommodation, ended up establishing a successful business venture known as Airbnb. Brian Chesky and Joe Gebbia started on this journey to create a multi-vendor marketplace with rental integration, with the thought of just earning a few bucks for subsistence.

In the year 2008, along with Nathan Blecharczyk, AirBed & Breakfast launched its website that surfaced on the unique concept of providing small living accommodations including breakfast to create an online marketplace.

In the year 2009, the company expanded its operations by introducing various properties such as apartments, private rooms, and much more resulting in quadrupled sales. In the year 2018, Airbnb announced the launch of Airbnb Plus for luxury vacations. As per stats for 2019, approximately 2M people had connected with Airbnb for rental spaces.

As the company commenced its operations in the year 2002, initially only in-house templates were designed and built for Content Management System platforms and Website Builders. In the year 2017, TemplateMonster became an online marketplace. Thousands of vendors of website templates and themes joined the platform to sell their products. At present, TemplateMonster is a marketplace that has more than 20,000 products for sale along with several other digital products.

The main target audience for TemplateMonster is anybody who owns an eCommerce store or is developing a website using CS software such as WordPress. Potential customers look for flexible template designs and theme options that they can easily find on TemplateMonster.

Here are examples of few more marketplaces that have reigned the eCommerce industry with their profiting business model and other logistical advancements. Growing tremendously to provide customers excellent user experience while shopping online.

Remember the magical phrase “open sesame” from the popular medieval folklore Alibaba and the Forty Thieves? That’s where the Alibaba Group got its name from. Along with a team of 17 friends and students, Jack Ma laid the foundation of the ever-growing Alibaba Group. The b2b eCommerce marketplace came into existence in the year 1999. In an attempt to refine the domestic eCommerce market, Alibaba got funding of US$25 million from Goldman Sachs and SoftBank.

With the vision of creating the perfect ecosystem of buyers and sellers and uplift small and medium-sized Chinese enterprises, Alibaba Group continued to expand its operations and export Chinese articles on a global platform. Three years after its launch, Alibaba became a huge name further launching Taobao Marketplace, Alipay, Lynx, and Alimama.com 2003 onwards.

Later, in the year 2010, Alibaba launched AliExpress which is an online retail service provider. Small and medium-sized Chinese enterprises got a platform through AliExpress to sell their products in the global market and attract international customers.

Etsy, an online marketplace for the purchase and sale of vintage and handmade goods was established in the year 2005. It is a Brooklyn based company that employs approximately 700 professionals and is a host to almost 1.4M sellers.

The idea of Etsy was formulated by Robert Kalin, Haim Schoppik, and Chris Maguire in a NY apartment. Inspired by the idea of providing crafters and artists a commercial platform, Etsy, an online marketplace was formed. The company grew when masses of sellers and buyers joined the platform in search of vintage and hand-made goods.

Etsy encompasses the ethos of handmade and vintage goods that artists create with passion. From the buyers’ point of view, it is galore of authentic, vintage, and handcrafted goodies. On the other hand, from the sellers’ point of view, Etsy is a platform where they can easily associate with potential buyers.

eBay, initially known as AuctionWeb started its person-to-person transactions interface for collectible items in the year 1995. Started by a computer programmer, Pierre Omidyar, as a mere hobby, soon it gained popularity and became a well-known auction website. Due to the influx of traffic, AuctionWeb garnered immense fame as a budding e-retailer and went on to be officially be known as eBay in the year 1997.

Incorporated almost 24 years ago, the enterprise continued to grow its operations and become a multi-vendor giant. With its prodigious success, thousands of brands started listing their products on the website making it an online multi-vendor marketplace. To keep the growth increasing, the company spent liberally on new site features and categories. eBay reported $4.6 million in product development expenses in 1998, $24.8 million in 1999, and $55.9 million in 2000.

eBay started expanding its operations to become an online marketplace by introducing more categories other than just collectibles. The demand for almost every product that had some sale value was added to the eBay product list. In no time, eBay had 12 million registered users along with a cyber inventory compiling a total of 4.5 million products making it a humongous multi-vendor marketplace.

Wish to start your online eCommerce marketplace? This is how you can get started!

The eCommerce scenario has changed considerably. The evolution of online marketplaces and the growth of eCommerce platforms can be seen after the success of the aforementioned eCommerce giants who started off as single vendors. There is plethora of growth opportunities and verticals for potential entrepreneurs who are in search of a marketplace solution to launch their business. One such online marketplace Solution is Yo!Kart.

The competition out there is indeed cut-throat. Entrepreneurs need to develop an understanding by identifying the perfect multi-vendor marketplace solution to boost their business and be inventive.

The demand for such eCommerce Marketplace websites has been witnessing a constant growth from the consumers. Imagine the benefits attached to launching your business on these platforms! You do not require a storefront or an inventory to function. All you need is an online marketplace.

Launch An eCommerce Marketplace With Yo!kart