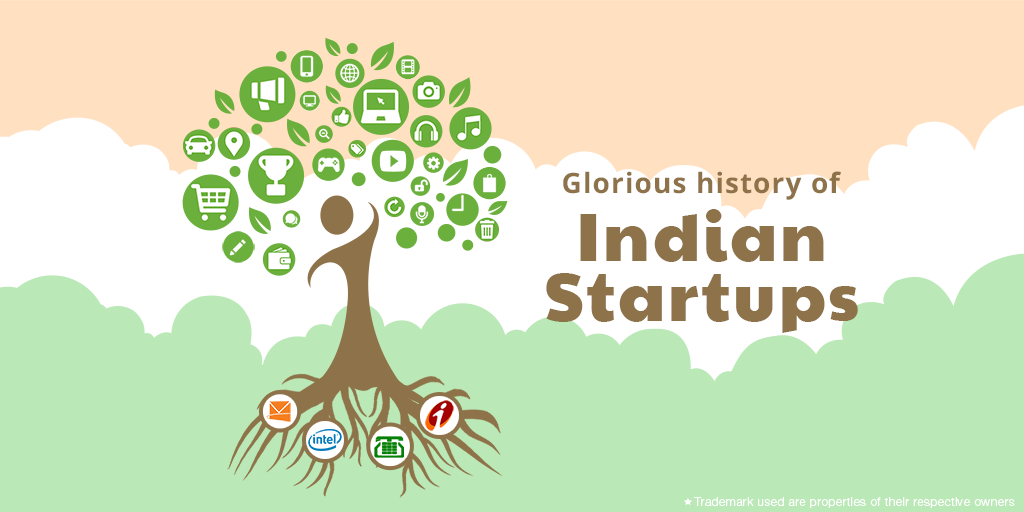 The Indian startup ecosystem has progressed over time. Today, Indian startups have become an essential part of the economy providing employment to thousands of people. With Indian government readily accepting the important role of entrepreneurs, several initiatives are going in full swing to help the Indian startups ecosystem grow.

India before the Golden Age of Startups

No wonder India has emerged as a startup nation with seeming opportunities for new entrepreneurs in last few years, as we have had few awesome visionaries even before India became popular for its IT services. They contributed to global startup ecosystem and did an incredible job of promoting the startup culture outside India. The top names in this list are:

Sabeer Bhatia–A Stanford alumnus, who co-founded Hotmail in 1996 with his friend, Jack Smith.Hotmail is the only other email service provider that once stood ahead of Gmail. Seeing its potential, Microsoft acquired Hotmail in 1998 for $400 million.

Vinod Khosla – The co-founder of Sun Microsystems, who later started Khosla Ventures in 2004. He has been a part of many successful startups, including Kaggle, Instacart, Academia.edu, Scribd, DoorDash, Square, Yammer, and more.

Vinod Dham–Known as the father of Pentium chipsets, Vinod Dham’s genius shows through his entrepreneurial career.  After leaving Intel, he went to work for NexGen and Silicon Spice. Under his leadership, AMD acquired NexGen for a whooping cost of $857 million and Broadcom acquired Silicon Spice for a massive $1.2 billion.

The startup ecosystem in India has come a long way. The digitization has helped entrepreneurs along the way and has certainly contributed towards the rate at which startups are being founded these days.

Quite recently, the Indian government has also recognized this growing ecosystem with its Digital India initiative.

The statistics says it all!

Some of India’s most successful startups include Flipkart, Snapdeal, Zomato, Oyo, and more.

With more than 4200 successful startups, it is estimated that more than 800 startups are founded each year in India and this number is only growing.

Globally, India ranks third as the fastest growing base of startups.

How it all began…

Travelling the Extra Mile: When Government Becomes the Santa

The government of India is finally promoting the startup ecosystem with various initiatives like Digital India, Make in India and startup India.

With benefits like exemption from tax, funding for startups, and more, the government looks all set to boost the Indian economy and make India emerge as the top player in technology and innovation.

However, the first half of 2016 has seen a decline of up to 40% in startup funding than last year.

Even after such statistics, India ranks next to USA and UK in the race for having technology-startups.

Delhi, Bengaluru and Mumbai are some of Indian cities that have contributed towards landing India among the top three startup-friendly nations while Hyderabad and Chennai are gradually picking up pace.

Due to a large number of Internet users in India, entrepreneurs are focusing on startups that bring innovation to the current service industry.

On the other hand, due to the presence of ecommerce giants like Flipkart and Amazon, most entrepreneurs are forced to focus on tier 2 and 3 cities.

As per statistics, India has a rising number of food-tech and ecommerce startups, which accounts for nearly 40% of total angel investment.

The Road Ahead for Indian Startups

The optimist says the glass is half full, the pessimistic says it is half empty. The same holds true for the Indian Startups with regard to their future.

The Indian startup ecosystem has its fair share of pluses and minuses. Startups are not like large organizations that have deep pockets. When a startup suffers loss, most of its employees suffer, which is evident in the case of AskMe that led to 4000 people losing their job.

The enthusiasm among venture capitalists towards Indian startups is decreasing due to the presence of large number of unsustainable business models.

On the other hand, most startups in India, which are based on advance technology such as artificial intelligence, machine learning, and more, are being welcomed by venture capitalists with open arms.

India is undoubtedly leading the world forward by pushing the technological barriers with innovation, but with only small percentage of the population using Internet, more should be done to promote digitization across all sectors.

Government projects like BharatNet, which aim to provide high-speed internet connectivity to rural India, can help to connect talent with facilities, which modern educational institutions can provide such as online classes and skill development courses.

Statistics tell us that Indian startup ecosystem is growing exponentially and the zeal among entrepreneurs shows that the growth rate is not going to slow down.

If summed up in one line, it is the risk and reward state of Indian startup culture where  capital-efficient entrepreneurs are bound to sustain and do well and others who will succeed, will be the most innovative and considerate minds that offer sustainable value.

Introducing Tribe - Setup Your Own eCommerce Store For FREE