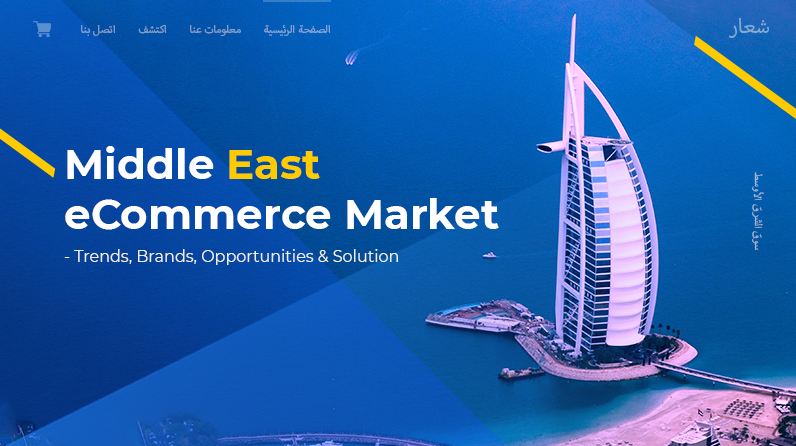 The Middle East B2C eCommerce market is on the verge of a pivotal shift. “The Biggest M&A (Mergers and Acquisitions) deal in the Arab world i.e. Amazon’s acquisition of Souq.com is the proof of it.”

It reflects in the number as well. Online shopping has grown by 1500% in the Middle East over the last decade and the market is expected to reach US$69 billion mark by 2020.

The Middle East customers have an extensive appetite for purchasing both local & global brands online. This means more multi-vendor marketplace opportunities can be leveraged in the region.

Combining insights from FATbit’s association with top eCommerce businesses in the Middle-east region and secondary research, we access the current Middle-east eCommerce market dynamics to throw light on opportunities, trends, brands, and solutions. Following are the areas that we have covered in the post:

Thanks to the high per capita income, the Middle-East is emerging as one of the fastest-growing markets in the world. There are multiple factors in favor of growth for the region. In the following lines, we will take a look at the latest eCommerce trends, key markets and key players involved in the Middle East markets.

The Middle East’s current internet penetration rate is 60 percent, well above the global average of 51.7 percent. Half of the population in the Middle Eastern countries is currently under the age of twenty-five. Also, the region has one of the highest social media penetration rates in the world. The young demographic spends more time on social media platforms which encourages marketers to use multiple channels to improve customer engagement on their eCommerce websites.

In 2014, the UAE government set up a duty-free eCommerce hub known as Matajir.com to work closely with various international companies. This initiative helped in establishing Dubai as a global eCommerce marketplace.

Factors such as the readiness of Arab consumers to adopt new technologies and an increase in usage of mobile devices have positioned the Middle East for a digital transformation.

eCommerce Trends in the Middle East

Saudi Arabia and the UAE are currently leading all the markets that come under the Gulf Cooperation Council (GCC). Other countries such as Qatar, Bahrain, Oman, and Kuwait also have remarkable eCommerce presence and growth but due to the low population, their contribution to the GCC is less.
Let’s take an in-depth look at some of the most  important markets:

According to the BMI stats, the UAE’s market size would be worth 45.6 percent of the total Middle East market by 2020. The tech-savvy cosmopolitan population makes the region favorable for eCommerce business.

With a population of 9.5 million (median age of 33), the UAE is considered to be one of the world’s most urbanized countries. Also, with one of the youngest demographics in the Middle East, the country has an internet penetration of 85 percent.

What are Emirates’ Users Buying?

According to Retail Week, the UAE population spends $400 (USD) a month on online shopping. The travel market has the highest online market share with 67 percent. After travel, computer purchases rank second with an annual online spend of $136/AED 500.

How Do Emirates Shop?

Why Invest in the eCommerce Market of UAE?

The UAE is expected to generate 50 percent of eCommerce sales in the Middle-East. More than 60 percent of UAE customers buy things from international websites.

Also, the average amount of one online purchase in the UAE is more than $300. These stats are enough to prove why the UAE is poised to become the eCommerce capital of the Middle East.

Currently, there are around 13 million eCommerce users in Saudi Arabia which makes it a huge market in the GCC.

33.6 million people of Saudi have a median age of 30. Almost 80 percent of the total population uses the internet and 33 percent use an online marketplace for shopping.

What are the Saudis buying?

Like the UAE, the travel segment has the highest market share in Saudi with average annual online spending of $478/ SAR 1,793 per person.

How do the Saudis Shop?

Why Invest in the eCommerce Market of Saudi Arabia?

But, the lack of a strong and widely diverse domestic eCommerce industry has led to the consumers choosing from international brands that currently capture a significant portion of the revenue generated in Saudi Arabia.

This gives opportunities to regional offline stores to adopt an omnichannel approach and win the online market. The following are the reasons why one should transition into the eCommerce business in the Middle East:

Out of these, many eCommerce marketplaces are earning a huge profit which inspires entrepreneurs to start their multi-vendor marketplaces in UAE, Saudi Arabia, Oman, Qatar and Bahrain.

How to Create a Multi-vendor Marketplace in the Middle East (like Souq, AliExpress, and Awok)?

In the case of the Middle-East market, choosing a canned solution with the availability of a customization option is always a better choice. You can create a marketplace in the shortest possible time with all the essential features for profitable on-line trading.

Moreover, if a solution can develop your marketplace according to the Middle-East customers’ needs (language, payment options, etc.), then, what’s better than that?

Yo!Kart is such a customized multi-vendor solution that enables entrepreneurs to launch an online marketplace like Souq and AliExpress.

Yo!Kart is equipped with Microsoft Translator Text API, a cloud-based machine translation service that supports more than 60 languages. This new frontier in applied intelligence comes with features such as

Natively Neutral: It captures the context of the sentence before translating them which leads to much higher quality translations than other translators.

Transliteration: It helps people pronounce words and names in a foreign language.

Bilingual Dictionary: It translates words or phrases from one language to another.

Also, all other major and minor details such as visuals, typography, icons, images, numerals, logo on the marketplace are listed in the RTL format.

Further, the MultiCurrency feature lets prices be displayed in different currencies and it helps the owner to stay up-to-date with the current currency conversion rates.

Apart from all these, Yo!Kart requires no third-party plugin and comes with a lifetime license. It has all the features (eCommerce, product management, UX & UI design, marketing, reporting & analysis, and payment) that you need for running a successful multi-vendor eCommerce store in the Middle-East).

Elastic search which is very important for eCommerce marketplaces that have massive databases is integrated within Yo!Kart. It stores and retrieve structural, unstructured or any other type of data and fetch the required search query within 10ms.

To improve the user experience that helps in increasing conversion rates, Yo!Kart offers native and progressive mobile apps for both buyers and sellers.

All three major types of customizations i.e. design, functionality, and 3rd party API can be done on Yo!Kart.

All three major types of customizations i.e. design, functionality, and 3rd party API can be done on Yo!Kart.

Yo!Kart experts can give a live face-to-face demo which includes requirement gathering, on-site demo, and subsequent Q & A session. Following are the benefits of the session:

For more information regarding the demo and its pricing details visit https://www.yo-kart.com/request-onsite-demo.html

Launch A Multivendor Marketplace In The Middle East With Yo!kart