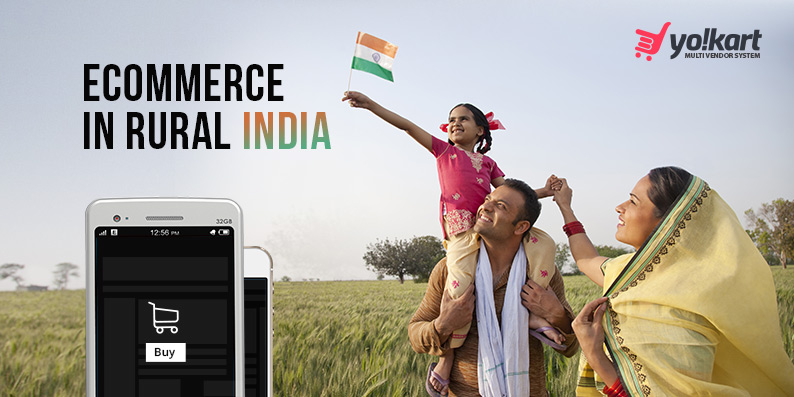 About 70% of India’s population lives in rural areas.

For ecommerce giants & startups alike, this is where opportunities lie.

As a matter of fact, most ecommerce pundits are of the opinion that this untapped market share is what will ensure a seamless growth of ecommerce sector in the country in coming years.

According to Internet Live Stats, the internet penetration in India has grown to 35%, up from 15% in 2013; thanks to the rapidly growing mobile internet. And with Indian Government’s initiatives like Bharat Net underway, this growth will accelerate further in the immediate future.

So when internet is there, why not online shopping?

But as the old saying goes, ‘things are easier said than done’, the road to ecommerce growth in rural India may not be as smooth as one would want it to be.

Here are some challenges that ecommerce businesses face currently when serving rural India.

Unawareness & reluctance in the rural populace

Internet penetration in rural India is increasing constantly, but people are still unaware of all the benefits of online shopping, like getting better deals, saving time & money, getting things delivered at home conveniently, and so on. Besides, those who do know about these benefits still feel reluctant to shop online because of sheer unfamiliarity.

The same challenge of mindset change was there when online shopping first began to ripe in India around 2006-07. At that time, it was taken care of by initiatives like Cash-on-Delivery payment method, money return guarantees, etc. Same trick can work for the rural populace now.

Another big & a more formidable challenge is the poor transport infrastructure in most rural areas of the country. Products which are delivered in metropolitan areas in a few days take weeks’ time to reach a rural destination (and that too only if delivery is provided in the given area in the first place).

However, on the bright side, ecommerce companies are gradually understanding rural India demographics, and are working in collaboration with Indian government & local communities to penetrate this immensely potential but under served market share.

Indian Postal Service has a ubiquitous network in the country and ecommerce companies have begun to leverage it to improve their reach in the far-flung regions. In fact, according to an iamwire study, about 400 ecommerce stores are already working with Indian-Post to deliver goods in rural areas.

In past couple of years, many ecommerce startups have emerged that are solely focusing on rural areas. To name a few, Inthree, Storeking, ipay, and edabba. It shows that current generation of aspiring entrepreneurs recognizes the potential in rural market. And collectively these startups are also spreading awareness in the rural populace about the benefits of online shopping.

Government’s policies to smoothen things up for startups

With the initiative, ‘Startup India’, the present Government of India has made it considerably easier for new startups (local & foreign alike) to establish themselves in the country. The whole Indian startup ecosystem has received a boost from such policies, which will surely improve ecommerce’s state in rural India as well in the coming time.

Need the right technology solution that can do justice to your potential startup idea?

The present state of ecommerce in India is similar to what China experienced a few years ago. So, it would be a good approach for startups to look up how Chinese ecommerce companies overcame challenges to serve their rural populace better.

Things to learn from China

China’s ecommerce leaders, Alibaba & JD.com, both work with village promoters to establish a good reach in the rural areas of the country. The idea is, instead of home-delivery in rural areas, these ecommerce stores deliver products to a village center (organized by village promoters), from where villagers can pick up their orders.

The article also mentioned the statement of one of the village promoters saying,
“Older people do not understand online shopping. They don’t have computers. But when I show them the cheaper prices for goods they are buying already, they admit they are intrigued.”

Taobao, Alibaba’s B2C ecommerce arm in China, has brought a concept in the country called ‘Taobao Villages’. These Taobao villages are simply a cluster of rural retailers with online presence. Through Taobao villages, the company is able to manage orders & delivery locally, therefore, provides a better service in these rural areas. Currently, there are over 1300 Taobao Villages across China.

Recommended Reading: How to connect with merchants for your online marketplace

Considering the lack of awareness & required infrastructure in India, using drone for delivery may seem like a little too ambitious idea for the time being, however, Indian startups should keep the option in mind for future. Chinese Ecommerce Company JD.com launched drone delivery program (in association with village promoters) to speed up its delivery on a recent sales day, which turned out to be a successful initiative and enabled the company to build trust among villagers about the efficiency of their service.

For both established players and new entrants, it is important to understand the market shift and plan their strategy accordingly to ensure that they are prepared for the future opportunities.

Have an idea for ecommerce startup to serve rural India?

Tap The Untapped Potential Of Ecommerce In Rural India